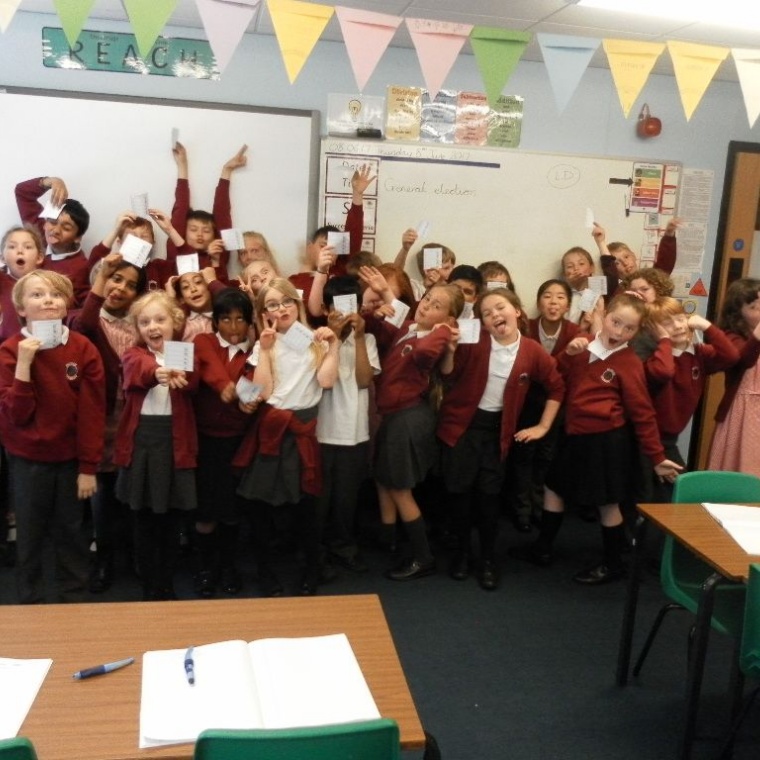 You might glance at the cover photo of this blog and think have year 4 gone mad? Why do they look as if their young minds are on the brink of insanity?

Well they are't going mad and they never did thankfully! Year 4 have had an exciting week learning about the general election and looking into what makes our British democratic system tick.Year 4 listened eagerly to each and every party broadcast their child friendly manifesto, courtesy of newsround. They then took time to reflect on what they had heard and thought about which party in their mind was going to do the best job. Much discussion was had and many opinions were shared, then it was finally time for our own in class polling experience. Each child in year 4 secretly filled out their ballot paper and placed their vote into the secure and official ballot box (it looked somewhat like a printer box from the right angle...). Once the children had all secured their votes we counted them, it was tense, eyes peered at the counting hands, nervous whipsers were heard. Who would win? What had year 4 commited themselves to? Who would be the next policitician to try and bring peace to a turbulent world?

The votes were in...

It was a landslide victory for...

Cheers erupted from both classes as the majority had been sucessful. There was not one child who wasn't drawn in by the rush and excitement of their own class politics. That was, until the end, when we had to explain that their votes would have to wait a few more years to be legally counted!

But all in all a fantastic week, plus who knows, we may have stirred the makings of a future primeminister.